Fusion Ensemble is a module I have developed and now run at Bangor University School of Music. It began as a way of enabling students from China who play Chinese instruments to use them for their studies and assessment. As we have no teachers specialising in those instruments at Bangor this had posed some challenges. However, I took this as an opportunity to bring some of my expertise and experience together to offer something new to all Bangor music students: the chance to work in creative musical groups that were open in terms of cultural and genre influences, where students could play their own instruments, even if these were unusual in a university music context, or try out new instruments. 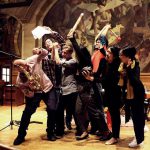 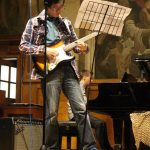 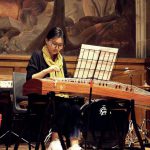 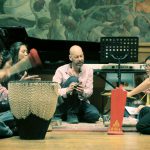 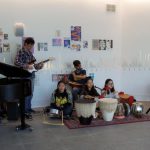 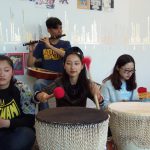 One important element of the ensemble work is improvisation. This had been mainly dealt with in terms of avant garde or ‘new music’ at Bangor. In Fusion Ensemble we also use other improvisational approaches, for instance those from jazz and Indian music. In the process of the sessions students are introduced to concepts from different musical worlds including modes from various cultures, rhythmic and melodic improvisation, responding to graphic scores and collective improvisation. Sometimes pieces are composed and arranged in the moment, in other words they ‘happen’ perhaps in response to a certain initial impetus such as a location or a meditation. Others are arrangements of existing pieces or a development of musical fragments. In all cases responding to each other in the ensemble, listening to the whole as well as contributing appropriately and creatively are encouraged.

This kind of interaction is new to most of the students who take the module. However, they usually respond to the creative openness of the situation extremely well. The basic concept is really that we accept everyone as a musician with something to offer to the group, and we also respect musical ideas from any source. As a result the pieces that come about are very varied. Some are atonal, some based on a traditional music idiom, some are a collage of various styles, some are based on pop songs. However, they are usually surprising and strikingly unique.

Since it consists mainly of students taking the Fusion Ensemble module as part of their course, there is no fixed line-up with groups of musicians forming for various performances, including for assessment. Various line-ups have performed at lunch-time concerts at the University, at the Bangor Music Festival, in the Pontio arts centre, and in the Bangor Community Arts space.