This was a physical theatre production based on Dostoyevsky text ‘Notes from Underground’ (‘Memórias do Subsolo’) performed in the Teatro Solar Boa Vista and the Casa do Dimitri in Salvador da Bahia, Brazil.

The company consisted of Maciej himself, the very talented female actor and dancer Daí, who was tall and lithe, and engagingly irreverent. And Inaciao, a gentle and expressive performer from Salvador. I was involved as composer and performer.

Maciej had been looking for musicians. He had a roped in a few people but was trying to get a professional involved. He had asked me a few times and in the end I agreed to come to a rehearsal. I was not really expecting to be interested as I was working on the album with Bira.

However, the rehearsal intrigued me. It was nothing quite like anything I had seen or worked on. The piece was based around some text fragments taken from the fragmented text by Fyodor Dostoyevsky known as Notes from Underground, or Memórias do Subsolo in Portuguese. It is offers an introspective, dystopian, existential vision of being in the world. The actor/dancers moved in ways they had developed in improvisation and also delivered the words. There was an obvious place for music of some kind, but nothing that they had tried had quite worked.

I had at my disposal my soprano saxophone and various percussion instruments. Maciej was thinking of the sound of breathing as a possibility. I went and bought some jazz brushes with which I stroked and hit various drums, and non-drums, to produce different respiration and percussive sounds. I followed the movements and worked around the spoken words. I immediately became aware of importance of avoiding too much ‘Mickey Mousing’ i.e. producing quasi synchronised sound effects. Although I was doing something approaching this at various points, too much could easily have become comic and also then expected for the performance as a whole. I needed to keep the sounds in the conceptual and emotional realm, rather than the literal.

My perception of the drama was of an inner world where ordinary encounters and thoughts were experienced as strange and problematic. The sound world I created was intended to give another dimension to the open consideration of these fleeting but difficult moments, which were being indicated in word and movement in the dance space. The breath-like sounds, various knocking and scraping noises, sweet but atonal saxophone tunes, multiple sax harmonics and rolling kalimba patterns produced an in-the-head subjectivity for the performers, and eventually for the audience.

The improvisatory aspect was of interest to me as this forms part of my other musical work, too. It meant that I was immediately at home with the approach but also recognised the problems of where to solidify the structure, particularly as the first public performance approached. Maciej struggled with this, wanting to explore new possibilities right up to the wire. The piece, in any case, retained a fluidity and openness even though we were following the script. In performance I think it was confident and immediate, thanks to the improvisatory character combined with many weeks of experimentation.

Maciej was absolutely driven and found it difficult to get the rehearsal time with the whole company that he would have liked. I told him early on that I could not work with him for hours day after day because of other commitments, notably the album I was recording with Bira. One day I did appear at the UFBA dance department for a rehearsal and found the company standing dejectedly in front of the building. The School is closed, they said, because the director’s husband has died. I was surprised that this would mean the closure of a university department, even for the day, until I realised that a kind of wake was taking place in a big hall at the side of the building, with dozens of mourners, a choir and the open coffin. However this did not stop Maciej wanting to work, and after finding a suitable piece of lawn on the campus, and overcoming some shyness it has to be admitted, we practiced there amongst the chattering, texting and smoking students.

The first performance in the indoor amphitheatre-shaped space of Cine-Teatro Solar Boa Vista brought a team of helpers together, many of them theatre professionals. There were last minute panics over props and instruments, but the show came off brilliantly IMHO. Afterwards the audience engaged in discussion with us and seemed to have been drawn into the piece on many different levels. They were kind enough to express their appreciation of my music, too. 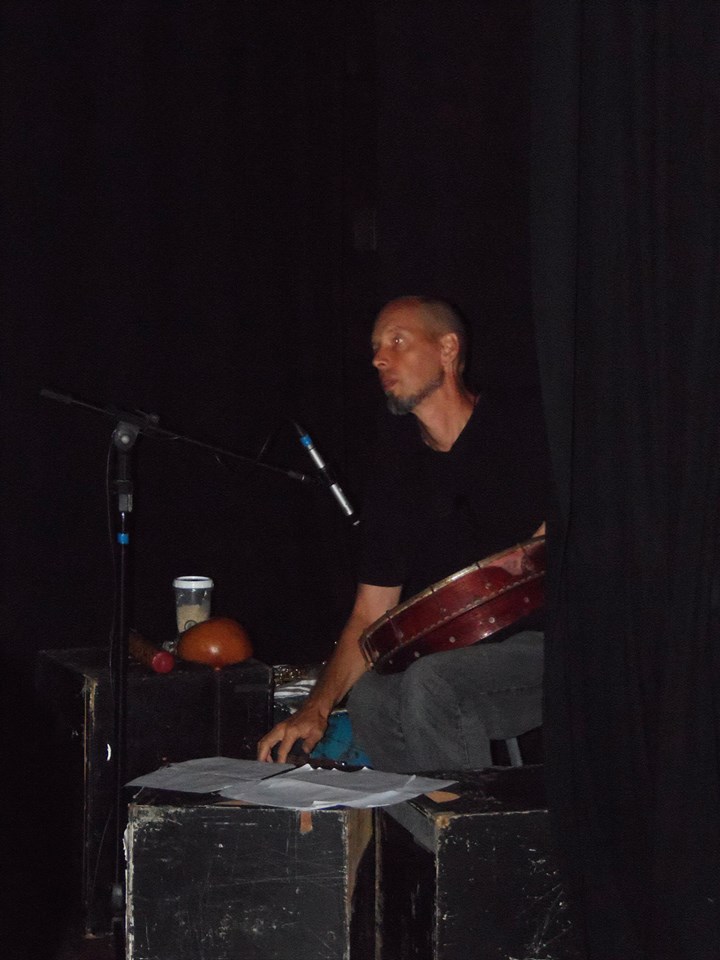 I am very appreciative of having been part of this production. Not only was it creatively challenging and rewarding, but the relationships I formed and deepened with the company and supporters were fantastically warm, supportive and enjoyable. The second performance, was in Casa Dimitri, the house/gallery/performance space of a well-to-do French expat, who regaled us with tales of being in art school in London in the 50s. Again there were panics, this time about a transformer needed to make the stage-lights work with the idiosyncratic Brazilian mains. Again the audience were absorbed in the drama and expression of the work.

A few days later I left for Wales, not before celebrating with these great new friends with toasts of ‘to theatre’, ‘to art’ and ‘to music’.