Jochen is involved in a number of creative and academic projects which explore various areas of interest.  Projects include:

Fusion Ensemble is a module I have developed and run at Bangor University School of Music. It offers students the chance to work in creative musical groups that are open in terms of cultural and genre influences, where students play their own instruments, or try out new instruments including a gamelan tuned percussion instrument, an Arabic oud, a Hungarian zither, various percussion instruments including a Brazilian cuíca and a Portuguese guitar. The module involves improvisation, and introduces concepts scuh as modes from various cultures, rhythmic and melodic improvisation, responding to graphic scores and collective improvisation. 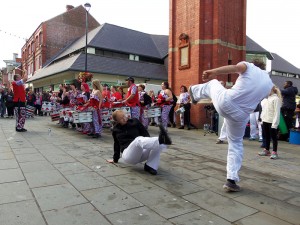 “I am interested in the intriguing phenomenon of people taking up exotic cultural practices. My main area of research in this area has been into Brazilian music in the ‘West’ and as practiced by ‘Westerners’. This has led me to other Brazilian forms such as the dance-martial art capoeira, Afro-Brazilian dance and the religious cult of Candomblé. Initially, I explored the meaning of samba for Western practitioners and the accessibility of this music. More recently I have been thinking about the more general concept of cultural adoption encompassing many types of music, movement and spirituality, and I am discovering what drives this interest, and what it can represent. Whereas each practice obviously has its own attractions, significations and implications, I think it is possible to see commonalities between quite a wide range of adoptions. I intend to be at once quite general and very specific about what exactly I am considering. …”
read more →

This was a physical theatre production based on Dostoyevsky text ‘Notes from Underground’ (‘Memórias do Subsolo’) performed in the Teatro Solar Boa Vista and the Casa do Dimitri in Salvador da Bahia, Brazil. Jochen was involved as composer and performer. read more →