This is Reginaldo and his little sound system truck. Like the other street music vendors he sells self-copied CDs and DVDs. END_OF_DOCUMENT_TOKEN_TO_BE_REPLACED

Since I’ve been in Salvador I’ve established the habit of having breakfast at one of the many little bars and cafés in Dois de Julho while reading a local paper. It’s a way of getting me through my morning blues, reading some Portuguese and keeping up with what’s going on. There are always some interesting crime stories which I find fascinating because of the human drama behind them.

Today A Tarde carried a section called ‘The New York Times: International  Weekly’ in Portuguese with various stories from around the world. The one that caught my eye was by Katrin Bennhold. It was a story about the apparently growing popularity of winter swimming in unheated outdoor pools in London. END_OF_DOCUMENT_TOKEN_TO_BE_REPLACED

I’m quite wary about blogging on this beach visit in Salvador, Brazil. After all I have enough trouble persuading people that I am here working and researching, rather than on holiday. And although I do occasionally go, for a swim and run perhaps at the  end of another sweltering day, it tends to be a bit of a project. Get the bus, or walk, where is safe to walk? Will the beach be too empty (not  safe) or too full (not safe). Once I get there, there is the problem of what to do with my stuff while I swim. You don’t really need to take very much because cold isn’t an issue. It’s more about money really. You’ll probably want some on you, at least for a bus home, but also perhaps for a snack and a drink afterwards. The solution is to ask someone to look after your bag. I’m quite used to doing this and I’ve never had any problems with it, but it does mean scouting the beach for someone who looks friendly and trustworthy. Families are usually a good bet, but I’ve asked all sorts of people and it’s always been fine. The context here is that Salvador is fairly crime-ridden. People get mugged a lot and there are a fair amount of shootings and robberies. This leads to everyone being more or less paranoid about  security.

Today my flatmate went to  the beach and asked me to  join him. I was still doing work but said I might come later – which I did. It turned out to be a little cultural adventure. END_OF_DOCUMENT_TOKEN_TO_BE_REPLACED

After sunset we swim back to shore and slowly make our way back up the favela, stopping to chat with people several times, then across the road and up the hill. The road leading up to the square has people who seem to be on the margins of a big event. The street reeks of urine, not just in one or two places, but all the way up. Cute houses, but the stench!! The square itself is busy and we push on to the road on the other side which is one of the city centre thoroughfares. It is clear of traffic and quite full, with hundreds of revellers attracted by the gay pride parade which has been going on, although not all are gay by any means. Bahians have gone into carnival mode: girls in even sexier getups than usual, lads topless, asking for kisses from strangers; costumes. There are some topless drag queens with quite big breasts, flaunting them down the middle of the wide road. One gets pushed to the wall on the pavement and snogged, I think it’s for the benefit of a photographer. While one guy is snogging her, someone else is kneading a breast. Somewhere else a muscly black guy tries to snog a black woman, who refuses, but as she pushes him away she has a good squeeze of his juicy pec. While I watch the ‘show’ Caudio chats animatedly with some acquaintances. END_OF_DOCUMENT_TOKEN_TO_BE_REPLACED

Where to start writing about this afternoon? So many impressions, so powerful, and yet almost from another reality. A film. A novel? No, I really saw it, lived it, I’m so glad I did, and then; I’m really not.

Down towards the sea. Claudio leading the way. Party atmosphere in the streets. Its Sunday, yesterday was independence day followed by protests and a minor riot, somewhere nearby there’s a gay pride parade.

We go down to the dual carriageway and cross over, dodging buses and cars. On the other side, a museum of modern art, which is closed. We take a left turn are beneath the road, following the concrete arches along. Soon they are covered in amazing graffiti. Paintings twenty feet high. Then one arch is occupied by a group of people having a meeting! Twenty sitting on plastic chairs in a circle. Claudio leads further on towards a little favela. One of the first houses we come to is an exhibition space for graffiti artists. A sweet young woman welcomes us and chats. END_OF_DOCUMENT_TOKEN_TO_BE_REPLACED 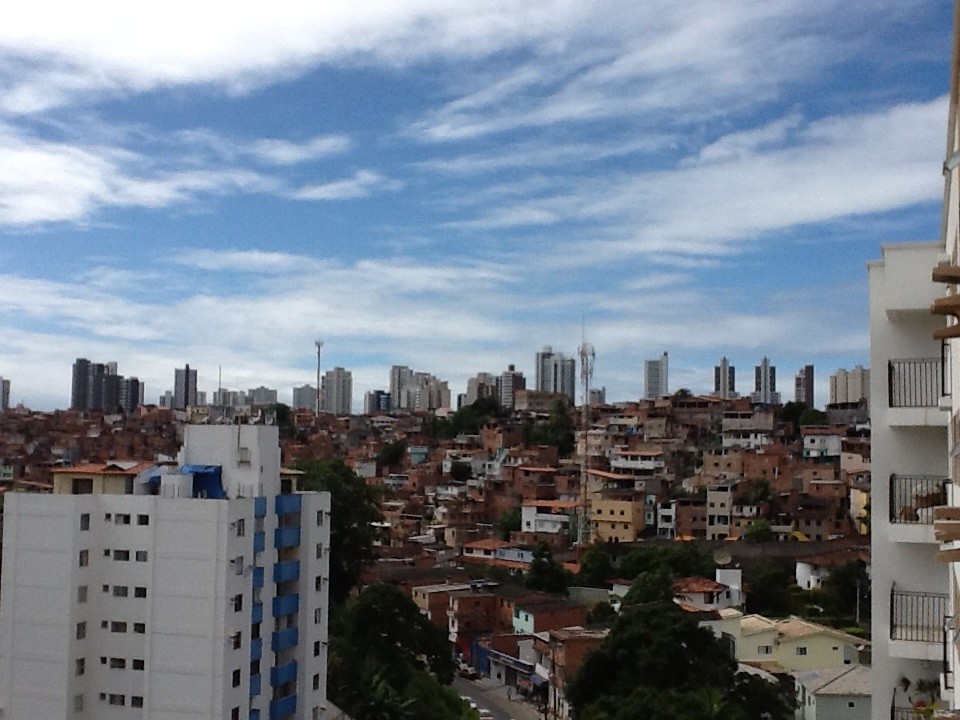 As you walk towards the heart of the historic centre of Salvador, Polourinho, you see a pass about five music shops. The are attractively presented and inside you will find many instruments strongly associated with Bahia and brazil more generally: samba band drums and hand percussion, atabaques, cavaquinhos, acoustic guitars as well as bossa nova sheet music and CDs of many well established Brazilian musicians. Further on, in the cobbled streets of Polourinho, many tourist shops sell berimbaus, musical bows used in capoeira which are a powerful symbol of Afro-Brazilian culture. Their very particular sound can be heard often around this part of the city, as well as various percussion ensembles, often accompanied by chanting and singing that evokes African traditions. this part of town is the showpiece of the city, known for samba-reggae, capoeira and Afro-Brazilian dance. It has had huge public investment, both in restoring old buildings and for cultural production, particularly of the cultural forms mentioned, as well as museums and special events.

If you happen to wander down the narrower, less welcoming street behind those music shops you saw before you will find amuch greater number of shops dedicated toanother kind musical (re)production. These, much smaller shops sell PA systems, speakers in all shapes and sizes, cables, lights, car sound systems to fit in the car, in the boot on the roof. END_OF_DOCUMENT_TOKEN_TO_BE_REPLACED