Yesterday, the day after my birthday we went to a small town near Santa Amaro to see a kind of festival, although ‘commemoration’ would perhaps be a better term. We got up early, despite birthday party hangover, to catch a bus put on by a tour company. All the excursionists were Brazilian, and local, as far as I could tell, apart from our party which consisted of five foreigners, most of whom live here and another local who is married to one of them.

Acupe, the little town,is on a tidal mangrove river on the Bay Of All The Saints in Bahia, Brazil, and originated as a quilombo, a settlement of escaped slaves. In an annual festival the residents commemorate the period of resistance by slaves and the repression of them. We see children apparently shot at point blank range, we see men and boys begging for mercy on their knees, we see chaos and violence between black people – and we see demons walking the streets.

Despite the many interesting and important aspects of  the Acupe festival, the one which I have found most difficult to interpret is the way it was consumed by us,  as spectators, as tourists, and in particular as photographers. There was a veritable feeding frenzy of picture-taking which was almost more extraordinary than the actions being documented by the cameras. 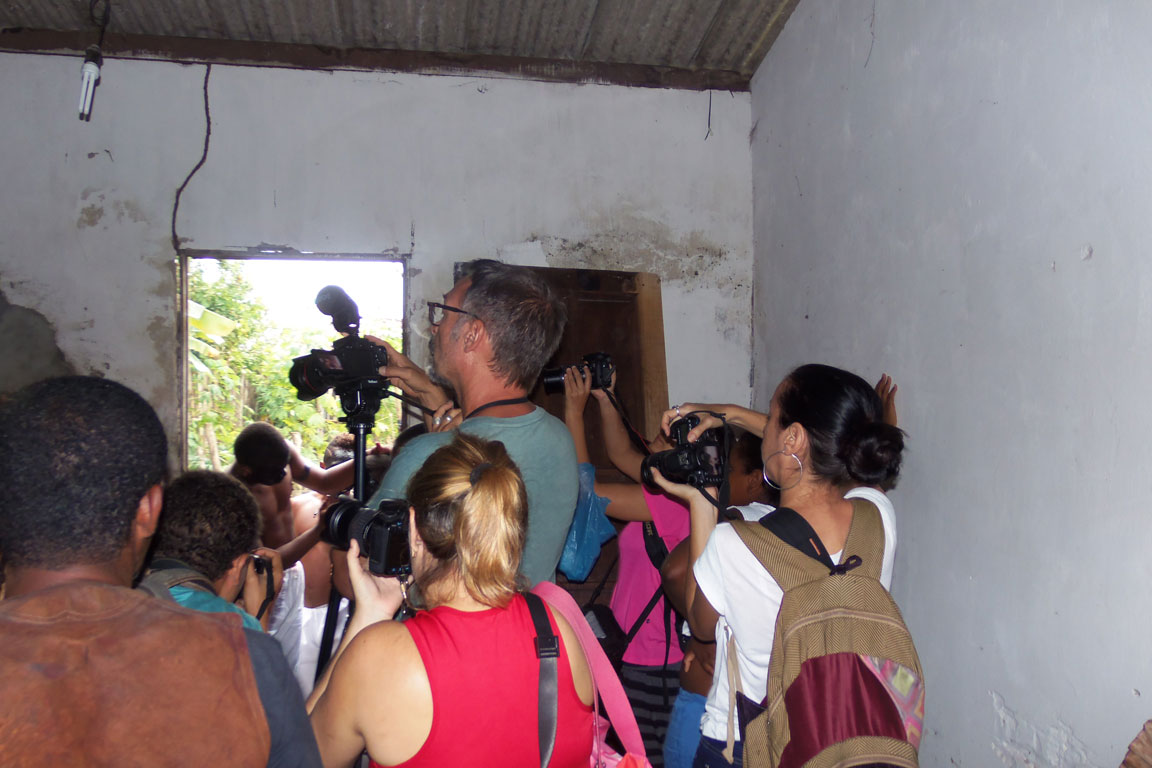 I was reminded of the Iemanja  celebrations in Rio Vermelho which I witnessed earlier this year. I myself had a  camera there as well, but  I ended  up taking pictures of the other photographers, because it seemed  to  me  that THAT was what was actually happening there; lots of people taking pictures of something that made them want to take pictures.

Why did I find this  troubling, and how can we understand it? I think there are a number of obvious and distasteful points which we can quickly cover. Firstly, if there is  some  kind of meaningful tradition or ritual going on, one which has a deeper religious or historical meaning, then this mass recording of it is surely intrusive, even if the tradition is a public event. Secondly, considering how keen the visitors are to shoot the event, it is  clear that it is worth something to them, but they are mostly not paying the subjects. They are taking something for free which clearly has a value. Then there is the way in which there is obviously an aspect of ‘lens envy’ to  this. Many of the cameras are big with huge lenses, showing that their owners are serious about photography, or rich enough to  buy them, or brave enough to carry them (given the prevalence of robbery in Brazil) or whatever. Basically, we are showing off. Some  less objectionable points would be that people are trying to be artistic, participating by framing the event in a way which engages our own creativity. We are also proving that we were there, the possibility of posting pictures on social media making this more immediate and giving it wider reach. There is a paradox here however. By taking photographs, people take a more active part in the event. We not only watch, but we document, we appear to be  more important because we are creating something extra out of what is being performed. However, we are also removing ourselves from the experience by seeing it through a viewfinder.  And, rather than thinking about what it might mean, and what significance it might have for us and the actors, we a busy looking for the best shot. So ,we are at once doing more that just being there, and also less. 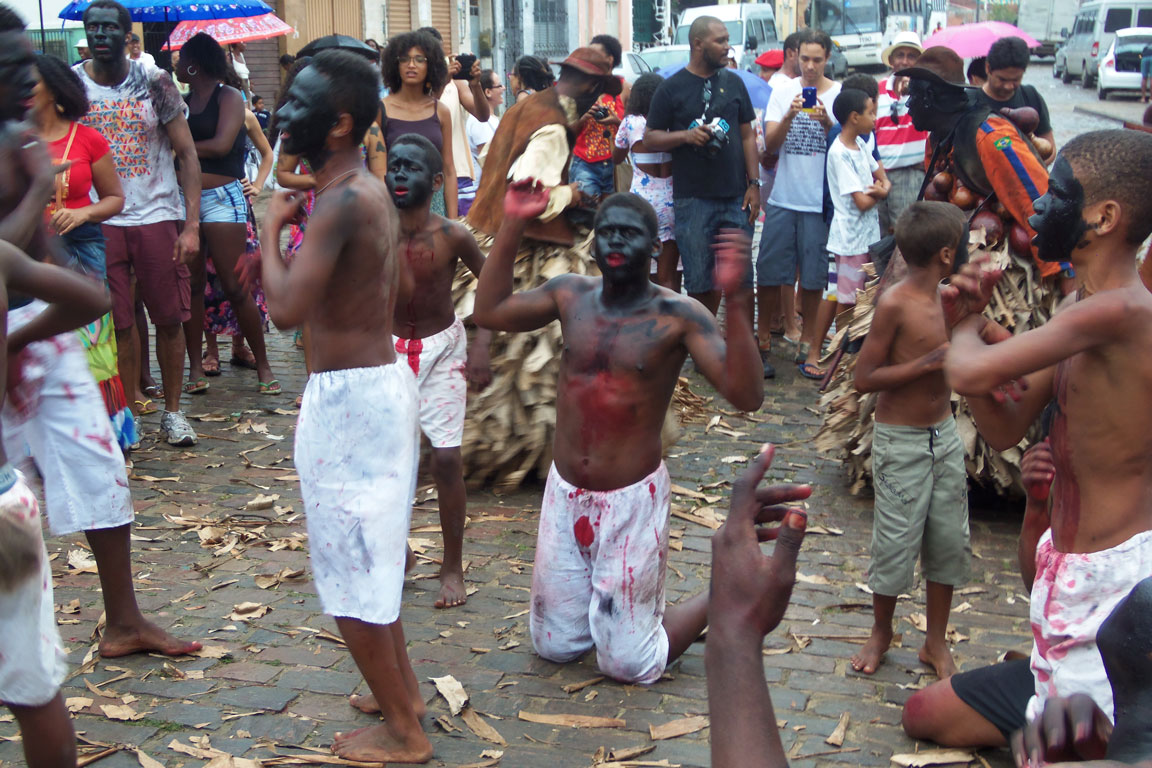 But how does this relate to what we might call the folkloric ritual? Taking pictures at once, literally, reduces it to the picturesque. The ‘photographers’ are attracted by the things which are not of  their world. The clothes, the tradition, the ritual, the beliefs. These things  appear ancient, although the people enacting them of course inhabit the same world as us and it is an anthropological commonplace to show how  tradition is invented and re-invented. However, from the viewfinder of the spectators this is not an issue. It is clear that the mere fact of being observed changes a situation. We know this  from psychological experiments and from how we behave when we are being filmed or photographed. So inevitably, any meaning or dynamic that an event such as Nego Fugido or Iemanja might have had is changed by the presence of literally hundreds of cameras. 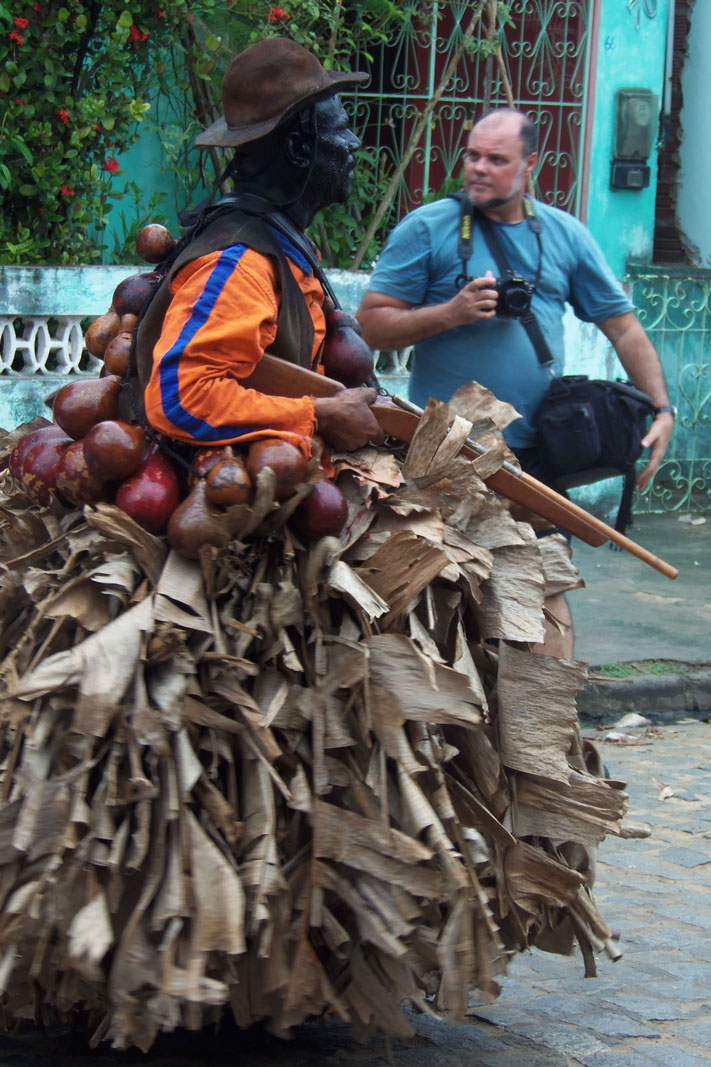 So what is really happening in these situations? There is an evident hunger on the part of the spectator-photographers. It is the hunger of the modern individual to capture something of what she has lost. It is the hunger of the post-modern human to  make those recaptured gestures virtual, to multiply them and spread them across cyberspace. It is the act of devouring something that we have destroyed, of vainly reaching out for things we  have lost: such as local particularism, local community identity, enchantment, belonging, owning a tradition, shared belief, connectedness with a history. But we cannot recapture these, and even the people in our pictures are being deprived of  them by our hunger. What is left is the ritual of people performing authenticity – and other people performing its documentation.